Our jumping coaches are Olympians, world class athletes and former D1 college coaches.
We do not hire assistants to work with the athletes, we work in small groups and 1 on 1. The listed coach for the camp is in front of the athletes at all times and is the only one doing the instruction. 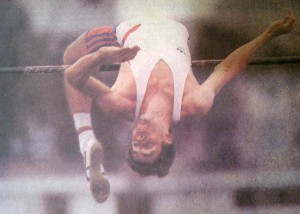 Hugo Munoz, a two-time Olympian. Coach Munoz was a member of the Peruvian National team in the high jump for the 1996 and 2000 Olympic Games, and jumped 7’6 1/2″ (2.30mts) in his prime (1995). As of today, he holds the Peruvian National record and South American Record U23 in the high jump and is the former South American high jump champion. Coach Munoz has helped athletes at every level, from youth to Olympians.

He also contributed to the USATF Coaches Association Magazine, Technique for Track and Field and Cross Country, with an article distributed to all HS and College Track and Field programs across the U.S. entitled, “New heights: How to teach the basics of high jump” (April 2009).

Besides holding the Peruvian national high jump record, he still holds the U23 South American high jump record (all time area record for U23) with 7’ 6 1/2” (2.30mts).  He was a finalist at the world junior championships in Seoul, Korea (92), and has competed internationally in every continent except Africa. He competed in the following international competitions as a member of the Peruvian national team:


For high jump camps, long jump camps and triple jump camps, video analysis and high jump festival please go to the following links or contact us by email kangarooathletics@gmail[dot]com or call us at (952)292-8226